Fleetway, in the future.

Standing at around 3'0", Keira is an anthropomorphic purple hedgehog with purple/pink eyes. She has a pale muzzle, rectangular nose, and purple quills. Similar to Sonic, she has five quills at the back of her head, except the lowermost quills are closer to her body than the rest, resembling a hair down style. Like Amy, she has quills on each side of her face. These quills are actually a longer and shorter quill tucked in together to form one. She also has four "bangs" on her forehead, one facing backwards instead of forwards.

Keira sports a pair of dark blue gloves with hot pink bands on the gloves' wrist part. These gloves only full cover her ring finger and pinkie, partly exposing her thumb and mostly exposing her middle and pointer fingers. She wears a white vest and arm sleeves, both containing hot pink markings. And securing the vest around her waist is a dark blue belt with cyan markings. A dark purple, sleeveless shirt and skort is also in her lump of clothing, as well as short leggings with cyan stripes right around the ends. Lastly, Keira uses a pair of boots for footwear. These boots have white soles, with dark blue being the more prominent color in said boots' body.

The ability to manipulate/control black lightning — the darker, and more destructive side of electricity. Weak to photo-electrokinesis.

Engulfing herself in darkness or in her own shadow, Keira becomes a shadow on the ground and enters ‘Shadow State’. While she’s a shadow, Keira’s immune to all attacks except other umbrakinetic moves, and can move around wherever she pleases. Shadow Travel will run out if she’s low on energy.

Wings weaved together by darkness sprout on Keira’s back, gifting her the ability to fly till her energy runs out.

A blanket of shadows surround Keira, becoming a shield for her to block against attacks. It’s quite fragile when hit by a powerful moves, and usually used for a quick block option.

A black lightning arch created by either engulfing her scythe with black electricity then swinging her scythe in a curving motion, or creating the arch by swiping her hand in a curve. The attack is then sent flying in a straight line, meant as a projectile for destroying objects.

Mainly used as a combo tool. Keira creates an arrow made from electricity, and throws it at the opponent, immobilizing them for a few seconds. Alternatively, she could coat any liftable object with electricity and have it collide with her opponents.

Keira creates a small dark shroud to temporarily blind a single opponent. The effect’s duration depends on the shroud’s thickness. The thicker, the longer it stays in effect.

• Of course, she has many more moves but these are her more frequently used ones.

Keira can absorb and convert almost any type of electricity that comes into contact with her body into extra energy. The only exception is photo-electrokinesis, which could be harmful to her system if a large amount is absorbed.

She can see perfectly in pitch black darkness, but only in shades of grey.

Keira admires and respects the yellow hedgehog, despite his continuous attempts to flirt with her. She was originally quite closed off with him, but through persistence, he managed to become one of the first people she could open up to. It was like a breath of fresh air after a suffocating experience.

Since then, she learned many things about Fleetway. Like the effects of long-term usage of his powers, personality, or his ideals and background. At the same time, he learned more about her. She helps him at his worst, just like how he helps her get over obstacles.

Finding the cat’s bubbly personality overwhelming at first, it took Keira a long time to get used to the cat’s chaotic energy. At the end of the day, Mysta’s ability to express herself freely and brighten up an intense situation was what Keira found truly incredible.

Mysta was incredibly excited about another girl joining the team, and thus, dragged Keira around town to go shopping. Keira is a frequent victim of one of her many fashion schemes, but the hedgehog tolerates it nevertheless. Even though Keira isn’t a reliable person to come to for emotional advice, Mysta goes to her anyway; as the hedgehog is a good listener.

Bonding over bullying/teasing Mysta, Siegfried plays a big role in getting Keira to loosen up a bit. The tiger taught her how to relax and be more confident herself, and to not only work hard, but play hard too. Siegfried’s like the older, hyperactive brother of the team with a big heart, and that’s what Keira respects most about him.

Not particularly close to the lion, Keira tends to avoid Scorch because he’s intimidating. They’re able to tolerate each other, but it’s always an awkward time whenever they’re stuck together. But over time Scorch has grown a lil’ more fond of the hedgehog, letting her hide behind him in crowded areas, and taking care of her like a little sister.

He prefers not to grow too overly fond of anyone on the team. So when Keira came to the team, he didn’t bother interacting with her. But he tolerates her presence.

Always the sane one in a chaotic friend group, Raidon gets overwhelmed by their energies pretty often. To his dismay, the two newcomers soon joined the fray. Even so, the thorny devil is the group’s leader and father figure, and he cares for them all. Keira looks up to him even though he’s usually in an understandably bad mood, and she notes that the amount of patience Raidon has is insane.

Fleetway and Keira! Made by TinyPyro on Amino! 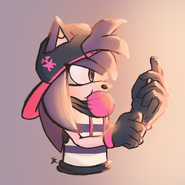 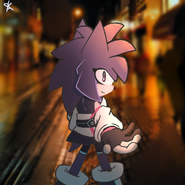 oh my god old art HAHAHHA WOW MAN 2016!
Add a photo to this gallery
Retrieved from "https://sonicfan.fandom.com/wiki/Kalamaris?oldid=8184"
Community content is available under CC-BY-SA unless otherwise noted.